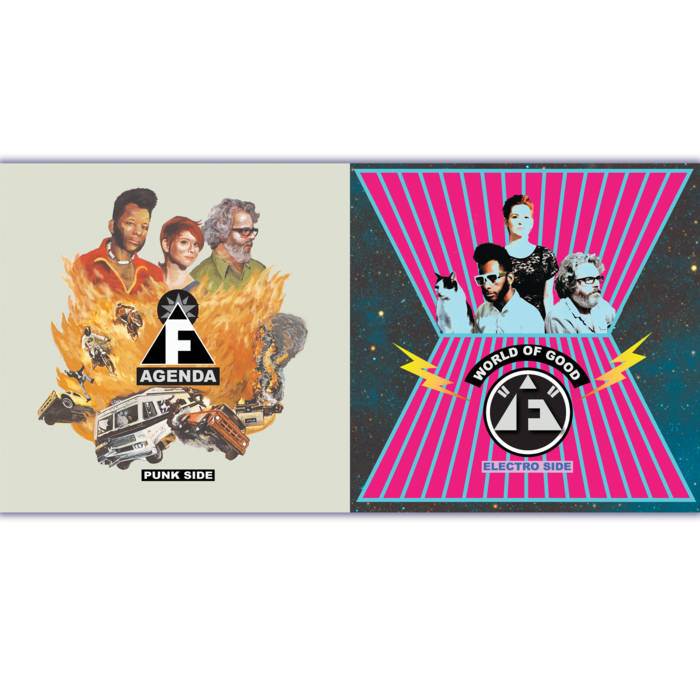 Please visit okayrecordings.com or look for this album on iTunes - Amazon for cheaper digital pricing - Album is also available as 2 seperate EPs - "Agenda" features the Punk songs, while "World of Good" features the Electro Songs

The second album from F City, released by OKAY Recordings consists of 2 sides, one side is PUNK - the other side is ELECTRO.
An overdrive bass riff pierces through the lasers and smoke, a drummer dressed in all white and ski goggles ignites a fast paced groove with a drum fill. The singer walks toward the crowd in a black cat suit and sings the first line, “You watch yourself, We watch yourself, so finely tuned and edited!” Arms in the air, cheering, wild outfits, and a crowd surfing snake are seen at a downtown club in Baltimore at 12:30 on a Saturday afternoon.The video shoot for “F”'s song, “Impression Manage- ment” had music lovers from all over the city coming out to sup- port the band's new arrangement and be seen.

“F”, a trio featuring Paul Joyce on bass and electronics, Lala Anderson on lead vocals and keyboards, and Landis Expandis on lead vocals and drums can be called a Baltimore supergroup. Each member, steeped in the tradition of Baltimore's booming art and music scene, comes together to create this “Soul Punk” for cross-over people -- people that one might see at a DJed dance party downtown, and later that night at a rowdy rock show uptown.
French TV chef and music lover Charlie Kentish described the new “F” release as “Steve Strange meets Gary Newman for an electronic acid jazz fusion with a sniff of Snoop chucked in for good measure,” and “Equally as brilliant Amy Winehouse, Blondie, Pink – punk rock. Thank fuck there are still people who understand the true meaning of rock and roll.”
“F” drops their second album, Agenda/World Of Good, this fall on the Okay Recordings label; they'll also be releasing a video for their song Impression Management. This unique two-sided album will devote a side each to Punk and Electronic musical stylings, and will be released both on CD and USB.

OKAY Recordings prefers you purchase this and all of our albums from a source outside of bandcamp - All of our releases are available on our website - www.okayrecordings.com and also available at all STREAMING - and DOWNLOAD sites, including spotify, itunes, and amazon - you are free to purchase music here - but it is cheaper on the other sites -

Produced & Mixed by Paul Joyce in Baltimore, MD at the Hot Box
Mastering by Rob Girardi

All Songs Written by Expandis, Joyce, and Anderson
Additional Writing by Eze Jackson on tracks 7,8,9,10
Copyright 2017

Bandcamp Daily  your guide to the world of Bandcamp

Featuring interviews with the mighty Hiatus Kaiyote and genre-busting L'Rain.